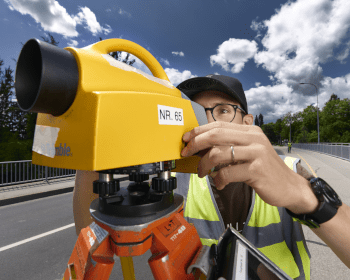 A surveyor from CERN performs levelling measurements using the instrumentation and procedures from Swisstopo (Image: CERN)

A key recommendation of the 2020 update of the European Strategy for Particle Physics is that Europe, together with its international partners, should investigate the feasibility of a future hadron collider at CERN. Consequently, the Future Circular Collider (FCC) Feasibility Study has been launched with the goal of demonstrating the technical and financial viability of such a facility at CERN. A vital aspect of this study is geodetic measurements* of the region, a prerequisite for the high-precision alignment of the accelerator’s components.

The Future Circular Collider would have a circumference three times greater than the Large Hadron Collider’s (LHC), covering an area about ten times larger than its predecessor’s in which every geographical reference must be pinpointed with unprecedented precision. To provide a reference coordinate system in this area, a team of surveyors from CERN have recently performed geodetic levelling measurements along an 8km profile across the Swiss-French border south of Geneva.

These new geodetic measurements, performed in May, have two immediate research objectives. First, they determine a high-precision gravity field model for the FCC region. This surface model, called a “geoid”, consists in a field that is perpendicular to the direction of a plumb line at any given point and is the basis for the altitude of a point. Second, the new measurements improve and update the present reference system, whose measurements date back to the 1980s, when the tunnel housing the LHC today was built. The results will help to evaluate if an extrapolation of the current LHC model is precise enough, or if a full redetermination is needed over the whole FCC area. In addition, the data collected will be used to write a PhD thesis and carry out postdoctoral research.

The present measurement campaign is performed in collaboration with ETH Zurich, Swisstopo and HEIG-Vd, in the framework of an FCC – Swiss CHART Collaboration. It is one of the first activities undertaken in the field for the FCC Feasibility Study.

The FCC feasibility study involves the cooperation of more than 140 universities and research institutions from 34 countries. It comprises a series of multidisciplinary studies including geological, technological, environmental, engineering, political and economic considerations from 2021 to 2025.  Should the FCC Feasibility Study lead to a positive result and the project receive the approval of CERN’s Member States, civil engineering works could start as early as the 2030s.

* Geodesy is the science that studies the Earth’s shape, size, gravitational field, orientation and rotation.